Pelotons in the corporate world 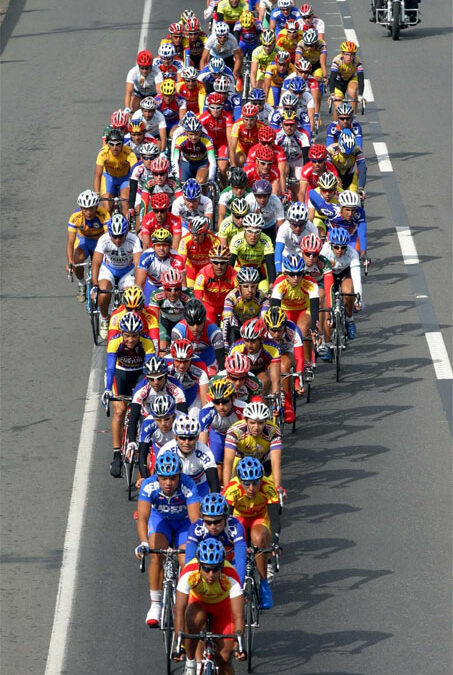 Most people do not realise that cycling in the road racing format is a team sport.  To be honest, even although I have been a keen social cyclist for many years, it took me a while to realise this.  After all, isn’t it just loads of riders all trying to be the first to cross the finish line just like in running races?  No, not at all.  Even if you’re not a cycling fan, or even a sport fan, read on to the end because I think you might find this interesting especially if you are working person.

The Tour de France is the most well-known cycling road race in the world.  Held annually (except in 2020!), it is a race that starts somewhere in France, not always the same place, and winds it way over a period of just over 3 weeks to the finish line on the Champs de Elysees in Paris.  There are 21 riding days and only 2 rest days during the tour.  What do the riders do on the rest days you might ask?  Well, they normally go for a ride of 100 or so kilometres to keep their muscles moving!  The distances covered on the riding days are up to 250 kilometres and include flat routes and mountainous ones.

There are approximately 20 teams that ride the tour each year and there are always 8 riders that start in each team.  Not all 8 riders always finish the tour due to fall-out as a result of accidents or illness.  And not all riders have the same role in the team, just like in a rugby or a football team.  There are sprinters, climbers, time trialists, all-rounders and domestiques (servants).  The team members work together with a common goal, which is to get their top rider to win the yellow jersey in Paris.  The rider that has the yellow jersey in Paris, is the winner of the race, and their whole team celebrates the victory with them for a job well done.

So now to the main point of this article…what is a peloton and why do I say we have pelotons in the corporate world?  Directly translated from French, peloton means “small ball” but that is just academic.  What it is, is the main group of riders in a road race and it takes different formations throughout the race, some of which is dependent on prevailing weather conditions.  Riding in the peloton is energy saving except from the rider/s at the front who face wind resistance and therefore fatigue quicker than the rest.  It can be compact and low speed such as pictured above, or it can be long and narrow, even single-file, and high speed.  You will have seen birds flying in these types of formations too so perhaps those are also pelotons even although they are not racing.

In the peloton you clearly have riders at or near the front, in the middle, and at or near the back.  Throughout each stage of the race, it might be the same riders in these positions throughout or they will change around – this is called cooperation or teamwork and the position assumed by each rider depends on the type of stage, or the physical condition of the riders during each stage.  The domestiques or servants will often be seen moving through the peloton delivering fresh water bottles to their team members as this is their job…to serve their team, not to win the race themself.

At times the peloton will split up into many parts such as when a rider or more than one rider makes a break-away – this is called competition.  The break-away can be an effort to put other teams under pressure to the benefit of the riders in their own team and is often seen as a sacrifice with these riders being eventually unable to sustain the physical effort.  However, sometimes it is an effort to win the stage and take the glory of standing on the podium as a stage winner.  Most importantly though, no rider will make an effort to take the glory if it is not to the benefit of their team as the team always comes first.

All the time during the race every rider is wearing an ear-piece to allow for communication with their team managers who follow the race in cars.  They are kept informed of where every rider is in the race, most importantly their own team’s top rider, and they are told what actions they need to take to allow for the best outcome for their team.  If a key rider in their team has a mechanical or physical problem, one or more of the domestiques is told to drop back to assist them, even to give them their own bike and wait on the side of the road for a replacement – it’s all about what is best for the team.

I think that teams in the corporate world can learn a lot from cycling’s pelotons – the cooperation, competition, and sacrifice that they demonstrate all for the sake of one common goal.  Teams in the corporate world need to have people who like and are able to set the pace in the front, stablise and keep things steady in the middle, and protect fall-out at the back.  No-one is better or worse than anyone else in the peloton, but instead everyone is fulfilling an essential role for everyone’s mutual benefit. Pelotons are energy saving for everyone ensuring that everyone can make it to the end.

Sometimes in the corporate world people have difficulty realizing the position in the peloton to which they are best suited, which results in unhealthy competition and poor utilization of resources.  Some teams fail to acknowledge that there is a place for everyone whether it be at the front, in the middle or at the back and that without the right people in each of these positions, the team will not function optimally.  Some teams even have defectors who sabotage the team’s efforts.

So for every team in the corporate world it’s critical not only for the management to identify who is best suited where in the peloton, but for every individual team member to recognize their own most comfortable position – this is when a team will be at it’s most effective regardless of the job at hand.  And each team member’s position is not cast in stone as for different types of jobs there may be some juggling of position involved in order to bring out everyone’s strengths.

Finally, it’s also important to be aware of where each team member’s energy is at, both physically and mentally, as this may be a contributing factor to their position in the peloton at any given time.  It’s OK to take some time out from setting the pace at the front in favour of keeping things steady in the middle and this adjustment will be better for your team if you are suffering from fatigue.  The important thing to always keep in mind is what is best for your team’s common goal…after all, you are not working in a vacuum.