A tribute to the magical Shane Warne 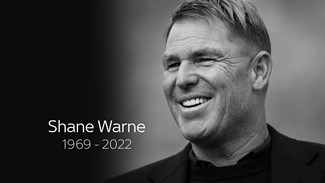 When I heard last week that Shane Warne had died, I have to say, one of my first thoughts was, “Please let this not be another death by suicide”.  I have been reading and writing so much on the topic of late that it’s not surprising I would have this thought.  However, this was a death from natural causes, a massive heart attack it seems.

For those of you that don’t know, Shane Warne was one of the best spin bowlers the world of cricket has ever seen.  I wish I could say he played for South Africa but no, he was an Australian that I’m sure many of our Protea boys wish had never picked up a cricket ball!  I have to be honest, during his playing years I too dreaded seeing his face on the pitch because what he did to that little ball was just magical.

Apart from being known to some as a King in cricket circles, I have learned over the past week that he was also a remarkable friend to many of his cricketing foes.  He even had ex-England cricket captain Michael Vaughn spend Christmas 2021 with him and his children in Australia while he was there fulfilling commentator duties.  I have listened to Wasim Akram (Pakistan), Ravi Shastri (India) and Muttiah Muralitharan (Sri Lanka) tearfully talk of their precious memories and all have described Shane as not only a brilliant cricketer but also a fantastic human being.

He was father to Brooke, Jackson and Summer and had been looking forward to spending more time with them to make up for his frequent absence during his playing years.  He was in fact taking some time away from the commentary box to spend more time with his kids, but first a quick trip with the boys to Thailand.  He was pictured with his friends at midday smiling and looking relaxed but by 5pm, he was gone having been found in his room by a friend when he didn’t show up for their late afternoon get-together as planned.

Shane Warne didn’t always live his life according to the rules and they say this is why he never captained the Australian team.  But he was loved for this too not only by fellow cricketers but by people and celebrities all over the world.  There are pictures of him with Chris Martin, Elton John, Ed Sheeran,…even Queen Elizabeth II.  His favourite meal was a lasagne sandwich with thick butter and although it is reported that he didn’t often overindulge, he loved a pint and a glass of red.  He was constantly trying to control his weight and was known to go on 14-day liquid diets to lose some of those extra pounds.  He had in fact just finished one of these before he left for Thailand.  So no, he wasn’t the healthiest sportsman in the world!

One of his commentary colleagues has spoken about happy he was prior to his death.  He was living his life to the full.  Another has said that although he was only 52 years old, he had lived a life of 80 years.  I suppose that is comfort to his loved ones during their time of deep grief.

So Shane, I salute you as a cricketer and as a person.  I am sorry I didn’t love you when you played the game, but I’m sure you understand…after all, I am a South African cricket fan and you hurt my team and me…many times.  You are a great loss to the sport I love, but much more than that, to your children, parents, brother and the many hundreds of other people with whom you so joyfully shared your life.  Rest in peace knowing your time here on earth was a job exceptionally well done.